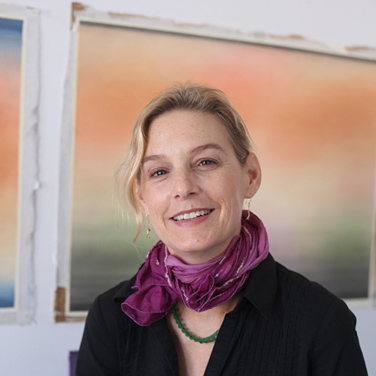 Kate Temple is a multi-media artist and educator whose work has been exhibited in museums, galleries, villages and abandoned houses internationally for more than 20 years.

She was born in Verdun, France in 1966 and grew up in the countryside of Southern New Hampshire. She studied at Rhode Island School of Design (1984), at Carnegie Mellon (1984-1988) and completed a four year training in Color based on the work of Liane Collot d’Herbois, Rudolph Steiner and Goethe.(2000-2005)

Throughout the late 80’s and early 90’s, she co-founded and was active in the artist-run annual Art Show for the Homeless and the Birmingham Lofts Art Space in Pittsburgh, PA. Her installation Elemental Correspondence was featured at the Mattress Factory (1995) and included in the book Installations: Mattress Factory (2000).

In 1995 she moved to Manhattan’s Lower East Side and began working for the Lower East Side Printshop where she was a keyholder as well, Major works include the Breathing Series (2001), created at the Lower East Side Printshop and the Center For Book Arts, Remedy for Winter Listlessness (2007,) site-specific installation, at the Mattress Factory, You/Me, Puglia and Ragni metaforici (2010,) site-specific works in Puglia, Italy, Propogating Eden (2010) at Wave Hill, Seni/Beni and flower carpet (2012)installations in Cappadocia, Turkey and You/Me, San Antonio (2013) a public site-specific commission for the Luminaria festival.

Her newest painting installation green earth/presence was featured in Tendrel (2015) at the Tibet House, NYC and she has been in group exhibitions at Central Booking, Goethe Institute, International Print Center and Sothebys in NYC. Temple received an Artist Fellowship from the New York Foundation for the Arts (1999), two EcoArts Awards for her site-specific work (2013, 2014), a Dave Bown Projects Award (2014) and has done residencies at Mira, Puglia, Italy (2010), Kala Art Institute, CA (2011), Babayan Culture House, Turkey (2012), and the Southwest School of Art,TX (2014). She is represented in numerous public and private collections including the NYU Langone Art Collection, Amerada Hess Collection and Lower East Side Printshop.

She was the Education Coordinator for the Lower East Side Printshop (1998-2003) and a Teaching Artist for Artist Space (2007-2015). She is currently the Director of Education at Artists Space and teaches her own courses called Substance into Color and leads workshops abroad called Origins of Color based on her own research and art practice. She lives on Manhattan’s Lower East Side.